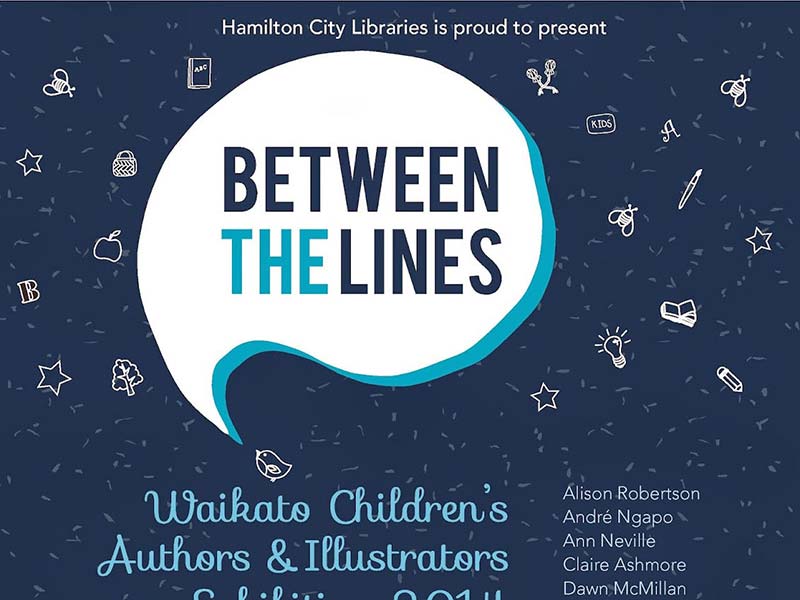 Hamilton’s Garden Place Library is providing local children and book lovers with a rare opportunity to get inside the heads of some of the Waikato’s best known children’s authors and illustrators.
On show from 1 to 30 April 2014, the Between the Lines Exhibition will reveal the inspiration and creative process behind a range of contemporary children’s books.

Exhibition coordinator Deborah Hinde says, “Children’s books are an exciting fusion of image and language, and we are thrilled to be bringing so many top Waikato writers and illustrators together in one space to share insights into what they do. For most people the book is the finished product, and we are not often afforded an opportunity to get behind the published pages and explore the processes and hard work that created them.”

As its name suggests, the exhibition’s focus is on the inspiration, research and process that lies behind a book by each of the featured writers and illustrators. The exhibition was inspired by the What Lies Beneath Exhibition, currently running at the National Library in Parnell, Auckland.

Supporting a good cause
Book week at Southwell School. Behind the scenes of how Kory was created.
Flashback 2014! When your book first goes on the shelf in a bookshop
Tamahere Christmas night market
On holiday at Ohope
New Zealand independent Book Festival 2016
Goodwood School in Cambridge visit
Adrian Kinnaird's Kory the Kiwi 'Flight of the Kiwi' review
Out and about in the Waikato
Out and about in Wellington
Copyright © 1996 Kory ‘Flight of the Kiwi’ written and illustrated by Paul Martin. All rights reserved.
Use of this website means you agree to the Terms of Use listed here.
Website powered by HiveHQ