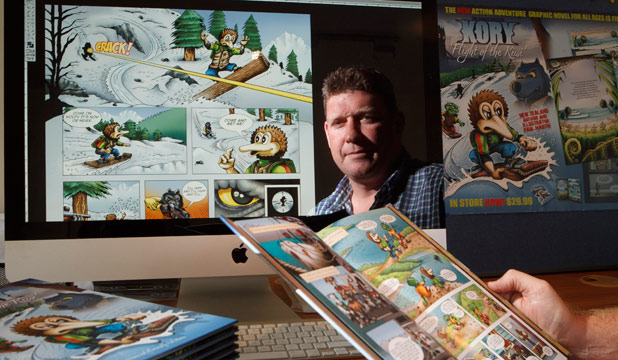 The book tells the story of the titular kiwi and his sidekick Gilbert the gecko, who cross paths with the evil Gregor, a grey wolf from Europe, and his henchmen.

Martin said project was no spur-of-the-moment endeavour and the book would hopefully be the first of many.

Martin said he was influenced by the comics he read as a youngster, including the 2000AD series, and Terry and the Gunrunners, created by New Zealanders Stephen Ballantyne and Bob Kerr.

"We have been distributing Flight of the Kiwi in bookstores ourselves and it seems to be becoming pretty popular. It seems the word is really starting to get out there."

The full article can be viewed on the Stuff.co.nz website.

Supporting a good cause
Book week at Southwell School. Behind the scenes of how Kory was created.
Flashback 2014! When your book first goes on the shelf in a bookshop
Tamahere Christmas night market
On holiday at Ohope
New Zealand independent Book Festival 2016
Goodwood School in Cambridge visit
Adrian Kinnaird's Kory the Kiwi 'Flight of the Kiwi' review
Out and about in the Waikato
Out and about in Wellington
Copyright © 1996 Kory ‘Flight of the Kiwi’ written and illustrated by Paul Martin. All rights reserved.
Use of this website means you agree to the Terms of Use listed here.
Website powered by HiveHQ